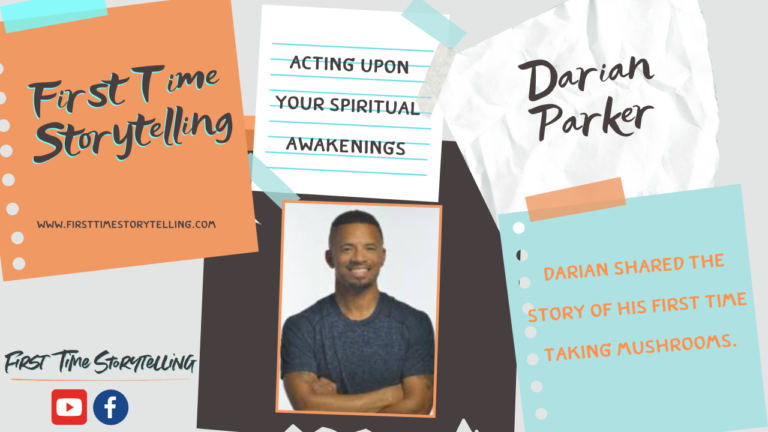 In this episode, Ann spoke with guest Darian Parker, host of Dr. D’s Social Network Podcast. He shared the story of his first time taking mushrooms and experiencing spiritual awakenings.

Parker’s story begins in Las Vegas, Nevada where he was running a luxury gym. One of his buddies was researching the benefits of mushrooms and talked to him about it. Intrigued, Darian began looking into them and discovered many people raving about them. Specifically, people experienced many spiritual and mood benefits so he decided he wanted to give mushrooms a try. However, mushrooms also have a bad reputation. It’s not uncommon for people to experience “bad trips” during their highs because they don’t use them correctly. Therefore, he thought it best to hire a special guide to help him. Darian wanted to improve his mood and explore the possibilities but did not want the negative side effects.

Darian’s guide told him the experience would change him. He was excited to hear it, but his wife was not. She worried about him changing too much but eventually, she gave in. The guide took Darian to Red Rock Canyon, where he could experience the mushrooms in the vast open space of nature. He popped all of them into his mouth and began waiting. After 10 minutes, he felt nothing. Then suddenly, everything he saw turned green. Moreover, his arms began to stretch. Darian began to panic because he felt sober, but saw hallucinations. But the guide assured him that this was normal. His body was dissolving and so was his ego.

For the first time, Parker felt like he was a free spirit. He floated through the canyon and watched as his guide turned into a monster, and the mountains began to breathe. When he closed his eyes, he saw outer space. The fact that he felt normal but was seeing strange things scared him. Darian imagined puking a mystery box into his hands. Then, he took off his shoes and touched the veins of the earth, sobbing at its beauty. He felt insignificant compared to the universe in that moment. It had not occurred to him that five hours had already passed. Finally, he came home to his wife and gave her the box he had imagined. Inside was all the beauty of nature, something she had a passion for. He felt as if the mushroom’s effects connected him to his wife on a deeper level.

Today, Darian feels a unique bond with nature as a result of the experience of his first time taking mushrooms. He touches the trees hoping to feel them touch back. His subconscious desire to grow spiritually brought him closer to nature. His yearning for nature grew so strong that he moved out of Nevada. Now in Washington, he chooses to live near the ocean because it gives him a sense of comfort.

His wife is now interested in trying mushrooms herself, but Darian has some advice to offer her and others who are interested. First, be aware that it can be a jarring experience. You may come across things that hurt you, such as people who have passed away. Next, he recommends having a guide to help you. Guides can offer you a sense of security and encouragement during the process. Without a guide, you may feel afraid and move away from the apparitions, limiting your experience. Finally, Parker does not recommend mushrooms to anyone who has health issues. The hallucinations can become overwhelming if you are not ready.

Overall, Darian’s revelations changed his outlook on life. He felt enlightened by the new perspective mushrooms gave him. They made him realize that his true calling was nature and that he was insignificant compared to the world. The experience made him question existence itself, and whether ordinary reality was reality at all.

Darian recommends giving mushrooms a try to anyone seeking spiritual awakenings. He claims that it changes you as a person because it opens up your subconscious thoughts and desires. Seeing mushrooms as a party drug takes away from this experience, so he recommends waiting until you are in your 30’s or 40’s to try them because you have a solid understanding of yourself. They will change the way you see yourself and others, and can help you attain a deeper, lasting state of mind.

You can learn more about Darian Parker by listening to his podcast, Dr. D’s Social Network, or visiting his LinkedIn.