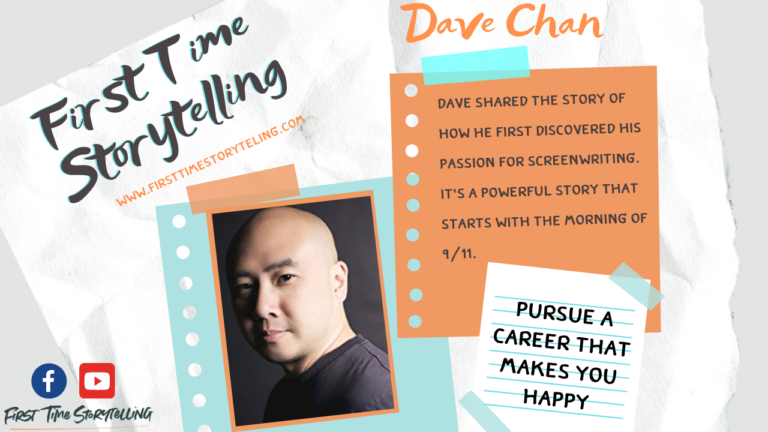 In this episode, Ann spoke with guest Dave Chan, a screenwriter, producer, and filmmaker from Brooklyn, NY. Dave graduated with a degree in forensic science and once worked in the financial industry until he realized there was more life in a morgue. He shared the story of how the events of the 9/11 attacks made him realize how short and unpredictable life can be, which led him to explore and discover a love for screenwriting.

Dave began with his memory of going to work on September 11, 2001. At this point in time, Chan was working in an IT company near the Twin Towers. It was around 8:45 am when he was exiting a revolving door at the train station. That was when he heard a loud rumble nearby. When he walked out of the door, he could see debris flying overhead. People were screaming and it was complete chaos. Sure enough, when Dave looked up, he saw a hole in the side of one of the towers. He immediately assumed it must have been a gas explosion or some other accident. Fighting through the crowd, he continued to his workplace and entered the building.

Everyone inside of the workplace was frantic once they learned a plane had hit the tower. They were able to see the building from their windows, and watched in horror as it crumbled. Dave and his colleagues finally decided to evacuate their building and run. Just as he had made it onto the street, he saw the second tower fall. He recalls it as the most traumatic experience of his life.

The World Trade Center Before 9/11

After the Attacks Pursuing Screenwriting

For the next week, Chan had many thoughts going on in his mind. He had watched so many people’s lives end in an instant. He saw people running and screaming, trying to save themselves and each other. Dave started to understand that life is short and unpredictable. Although he had a stable job, he felt unfulfilled with the life he was living.

That was when Dave met up with an artistic friend of his named Sid. Sid was trying to make a short film at the time and asked Dave if he was interested too. Dave enthusiastically said yes and began researching screenwriting and filmmaking. Then one morning, the ending of a story suddenly popped into his mind. He spent hours writing a story around this ending until he completed his first screenplay. Dave had little formal experience, but used what he knew to create the script for a short film called “Rat”. He felt accomplished knowing he had finished the script, but he still had his IT job to attend.

Regardless of his other responsibilities, Dave knew that he had a new passion and desire to be a screenwriter. The most he had ever written before “Rat” was for grade school competitions. He did not have a passion for it as a child but worked to acquire the necessary skills. As an adult, he grew to love writing, but only considered it a hobby. The IT job was still paying his bills, but he had no passion for it. He had to make a choice for what he wanted from his career and his life.

Dave decided that he was going to use all of his spare time to write. However, he quickly learned that screenwriters are forced to sell the rights to their stories. Once his story was in the hands of producers and directors, he would lose his control over it. As a result, he started producing short films to have more influence in the final product. Chan is now completing a Master of Fine Arts program and hopes to get into TV writing and production someday. He learned that IT was not his thing and that his other strengths made him happier than IT did.

Dave Chan’s story presents many important lessons about living life to its fullest. First, he reminds us to pursue our passions; after all, life is meant to be enjoyed. It may not always be an easy process, but hard work pays off if you stick with your goals. Next, he emphasizes the importance of learning from our mistakes. Chan made multiple mistakes in choosing the right career, but without these mistakes, he would not have found his true calling. Finally, he ends on a positive note stating that flaws are what build our characters. Without flaws, we would not be able to take on challenges and bounce back from them.