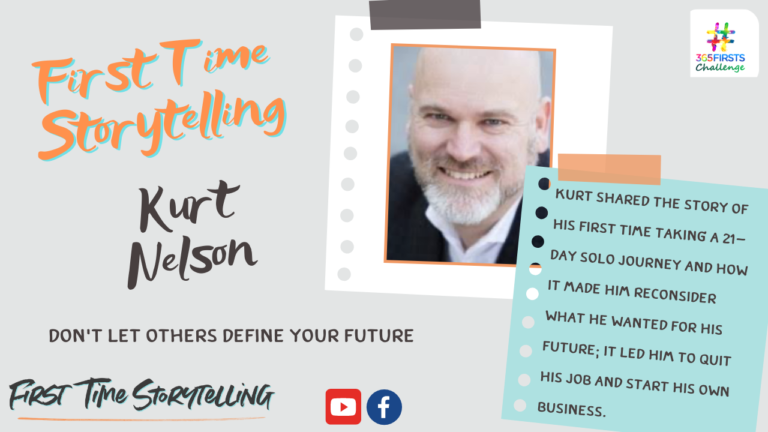 Earlier this month, Ann was joined by guest Kurt Nelson who is currently the president and founder of The Lantern Group, a behavioral science company helping to improve employees’ engagement and motivation in the workplace. He presented his inspiring first time story full of self-discovery and taking over the reigns of his own life during a 21 day journey in the great American outdoors.

Although Kurt is now the boss of his own company and his own life, things weren’t always this way. In his late 20’s, he was working for a company in Minnesota which offered him everything he wanted at that point in his life. He was well-off and enjoying the many perks of being in a respected position, yet something was still not sitting right with him. At the same time, he was readying Jon Krakauer’s novel Into the Wild, a true story about a man who ventures off into the wilderness with underlying themes of self-reflection and discovery. This book greatly influenced his mindset and attitude towards where he was in his own life. It was just the catalyst he needed to set off on an adventure of his own.

The Revelations of His 21 Day Journey

Kurt took three weeks off from work and left Minnesota with no plan or destination in mind other than seeing his girlfriend in California at the end of his journey. As with any drastic decision, he had his share of supporters and opponents, but others’ opinions were exactly what Kurt was trying his best to avoid in those few weeks. He turned off his cell phone, and chose to stop at locations in the western half of the United States where he was occasionally the only person in the area. The peacefulness and solitude he felt upon his initial treks were breathtaking, but he was still waiting for his moment to gain the answers to all of his questions from the nature. He expected the universe to give him a sign the way it does in adventure novels, but the first week lacked the life-changing epiphany he had been hoping to experience.

Eventually, with no one to converse with but himself, he began to really introspect and question whether or not his current job, relationships, and mental state were truly what he wanted them to be. With every destination he found himself headed, he wondered if his career and personal life were really leading him to his ideal destination in life. Was the straightforward route to success which his current company was offering him really the one he wanted to drive down?

Kurt knew one thing for sure: when he returned from his 21 day journey, he was not going back to his job again. He wanted a company of his own and was tired of working for other people. He knew that his family, who had an anti-entrepreneurship viewpoint because of past business failures, would probably not support his decision, but it was time that he stopped worrying about what others wanted for him.

Life after His 21 Day Journey

Upon his return to Minnesota at the end of his journey, Kurt Nelson put in his two-week resignation notice. He was looking forward to interactions with people once again. However, he knew that if he had not made the decision to take some time for himself, someone along the line would have discouraged him from following what he truly wanted for his future. He was able to take those two weeks to observe how everyone else was struggling under the demands of their jobs, but he now felt a sense of peace and relief from that chronic stress.

Looking back on the experience, Kurt’s current business does not perfectly align with the vision he had back when he was out in the wilderness decades ago, but that is what made the whole experience so impactful. Just like he had no true plan for his 21 day journey and simply went wherever his heart desired, he did not know where his new business ventures were going to take him.

As time progressed and presented him with new opportunities, he went through phases of dissatisfaction and confusion with his business but eventually found his way to having a successful company. Today, he is able to look at his progress “through a pair of rose-colored glasses” as he would say, or in an optimistic light that makes even the low points of his life seem like just another part of his amazing journey of self-discovery.

Where was the road he chose leading him?

The Lessons of his Journey

Kurt’s story presents the valuable lesson of finding your true self by shutting out the external pressures placed on you by others. He reminds us that it is okay to feel dissatisfied even when life seems like it is going well. You do not always need to hit a low point in order to initiate a drastic change. All it takes is an inspiration; whether it be a book, song, or real-life example, anything that strikes a chord within you should not be ignored.

If there is something you know you want for yourself, you should not be afraid to go down a path of uncertainties if it has the potential of leading you to the future you have always dreamt of. And when you look back upon what may have seemed like a difficult time of your life, you will be able to see it in a positive light as a part of the journey that got you to where you are today.

You can listen to Kurt Nelson’s podcast Behavioral Grooves here to learn more about what he now does for a living, and how he has used his experiences to help others find themselves.