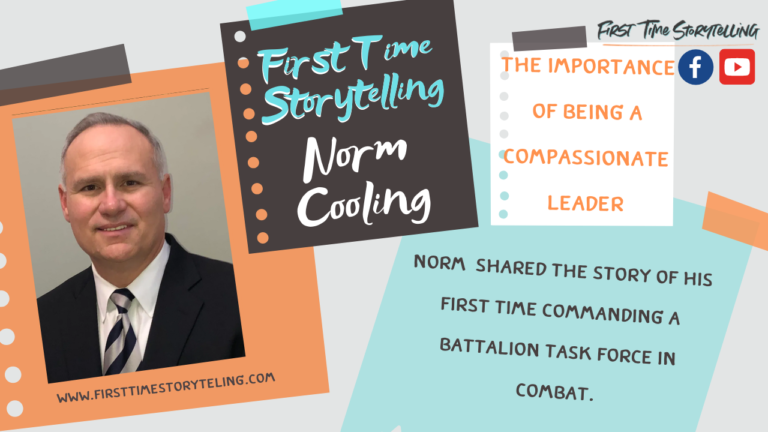 In this episode, Ann spoke with guest Norman Cooling, a retired Brigadier General (BGen) who spent over 33 years in the Marine Corps. He shared the invigorating story of his first time commanding a battalion task force in combat.

Cooling had just returned from serving in Operation Iraqi Freedom under General Mattis, the year prior, before assuming command of America’s Battalion, 3rd Battalion 3rd Marines in Hawaii, from a good friend. He was excited to take command of the battalion. He thought he knew what to expect until the Division Commanding General hinted to him at the Change of Command that he should prepare himself for anything.

There was much to train for and looked forward to with the battalion joining the 31st Marine Expeditionary Unit. They were in fact in the middle of executing the largest amphibious naval exercise in the world called Rim of the Pacific when Cooling received an important naval message. The message stated that the battalion was relocating to Afghanistan in four months.

He was surprised by the sudden news but started preparing immediately. Cooling used his team’s strengths to prepare by creating training programs. The sudden switch from the Pacific to the Middle East was not going to be easy especially when the battalion was only at 60% strength, at that time.

Difficulties of the New Mission

First, Cooling ensured that his battalion prepared for Afghanistan’s harsh terrain. The battalion covered a large area in the mountains of Afghanistan, and temperatures could suddenly change. Furthermore, heavy armor and gear made it difficult to regulate body temperature. It was very important for the companies to understand how to avoid heat strokes or freezing.

In addition, only about 5% of the battalion had any combat experience. This meant that Cooling had to prepare the group mentally for warfare. He also established a support network for the families back as well, who did not know what to expect from combat.

Soon, Cooling realized that in order to command the large group, he needed to have other leaders in charge as well. He was lucky to have good relations with other task force leaders. With the Taliban entering Afghanistan, stakes were high. Luckily, the battalion accomplished many tasks with teamwork.

How Combat Impacted Cooling As a Leader

Over time, Cooling gained leadership knowledge as well. He used indirect leadership to divide the command and gain the trust of the battalion. It was difficult to make sure all of the commanders were cooperating. However, their patriotism united them. They were all fighting for a common purpose. Not all of it was positive, though. A few Marines lost their lives in combat, and Cooling had to help the team keep morale high. He knew it was his job to step up in difficult times. It was not easy to deal with loss, but the mission had to continue.

He also depended on faith to get through his struggles as a leader. He believes that faith gives him the power to keep going in difficult times. One gold-star mother wrote a book about faith and suffering after losing her son which struck him deeply.

In all, we can learn many things from Cooling’s battalion leadership experience. First, Cooling used relationships to build bonds with his battalion. He always showed genuine care for his Marines like every good leader should. Second, he shared his responsibilities to create a chain of command. Cooling was not afraid to give up some power for the greater good. Third, he prioritized the safety of the indigenous civilians. Finally, he sympathized with the families of his Marines to honor the lost Marines. He exhibited every aspect of a great leader and took pride in his battalion’s work.

You can connect with Norm Cooling on his LinkedIn.