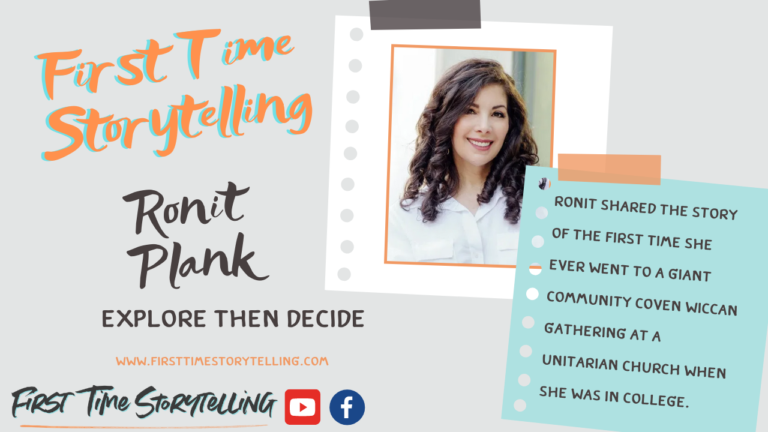 In this episode, Ann spoke with guest Ronit Plank. She produces the podcast And Then Everything Changed and authored the memoir “When She Comes Back”. Ronit shared the story of the first time she ever went to a giant community Wicca Coven gathering at a Unitarian Church when she was in college.

“Ro-neet” is the correct pronunciation of Plank’s Israeli first name. She spent her first four years of life in Israel because her parents wanted to settle the land. After moving to America, her mother and father got a divorce. Her mother was a follower of Guru Sri Rajanish and was trying to figure out who she was. She was young and living in the 70’s, and she endured a lot of family issues. As a result, Ronit grew up with her dad while her mother went to India to follow the Guru. Her mother left multiple times throughout her childhood for this purpose.

When Ronit did get to see her mother, she would often read tarot cards. A large part of her childhood contained crystals and incense because of her mother’s passion. It made her familiar with aspects of non-traditional spirituality. On the other hand, her father was a typical New York Jew. Ronit grew up having a bar mitzvah and attending the synagogue, but her search for spirituality came with age just like her mother.

Ronit found herself in her senior year of college in Upstate New York. She had just returned from a semester abroad in Israel and was searching for who she was and her spirituality. She had a vision for her career which related to acting and animals, but she still had not discovered herself. That was when she came across a flyer for a student Coven which was teaching Wicca. There were slips of paper with phone numbers to contact the study Coven, and she felt like the opportunity was calling her name. Ronit immediately took the contact information. She signed up to have her first Wicca Coven experience and explore a new spiritual fascination.

Today, it surprises her that she even made this irrational and potentially unsafe decision back then. She did not know much about Wicca at the time, but she knew that she only identified with Judaism on a cultural level. The religion did not speak to her deeply because it lacked aspects of nature and feminism in her eyes. Through Wicca, she was able to lead a women’s Coven and explore religion through a matriarchal view, something she wanted with the frequent absence of her mother.

One cold winter night, Ronit decided to attend a community celebration called Candlemas for the first time. She took a bus alone and headed to the Unitarian church. She arrived and was met by a large group of unfamiliar, middle-aged white people crowded the dimly-lit church. They were wearing crystal jewelry and she could smell patchouli in the air. Twenty-year-old Ronit did not know anyone there, but she decided to stay at the ceremony for the Goddess she worshipped. Suddenly, the lights got even darker. She began to feel anxious because she had no idea what Candlemas was even about. No one even knew her exact location or who she was with.

A drum beat began to play in the background and everyone started forming a circle. From the corner of her eye, Ronit saw a shirtless, attractive man enter the center of the circle. He was dancing, and the rest of the older adults in the group were catcalling him. She felt embarrassed but went along with the ritual. The man disappeared for a second before returning with antlers on his head, representing the Stag God. The crowd got even more excited, but Ronit was not feeling it. Her Jewish side kicked in because she felt like she was worshipping an idol. She also felt uncomfortable with everyone gawking at him.

Ronit realized that she had gone too far. This exhibitionism was not representative of her spirituality anymore and she did not feel like it was the right form of worship for her. She backed out of the circle and left both the Unitarian Church and Wicca.

Reflecting On Her Spiritual Journey

Ronit quit pursuing Wicca after realizing that it was not for her, unlike her mother, who went all in while exploring her spirituality. She did not want to get caught up in the group mentality, and her experience with non-traditional religions helped her know when she had gone too far.

Ronit’s story reminds us to continue exploring our religious beliefs until we find something that reflects us and our values the best. But, she also reminds us to not go into anything blindly. Do research, have new experiences, and do not be afraid to back out of something that does not feel right. Question religion, politics, and all aspects of life to form your own understanding of yourself and your morals. It is better to leave a form of spirituality behind than to pursue one that does not speak to you.