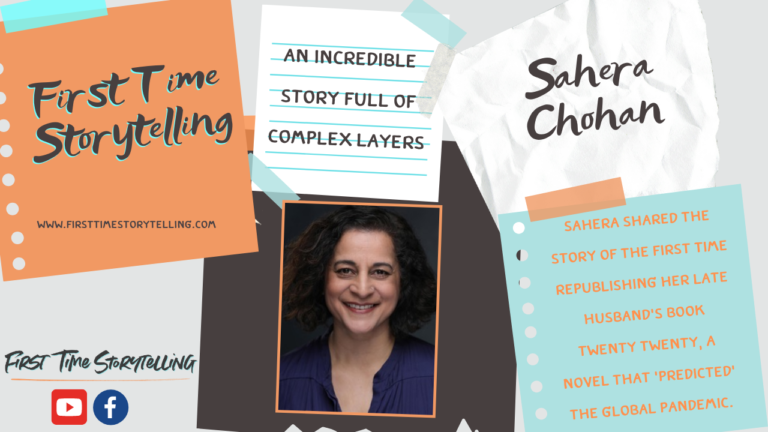 In this episode, Ann spoke with guest Sahera Chohan. She is an author, leadership coach, and former BBC broadcaster. Her riveting story is about her first time republishing her late husband’s book “Twenty Twenty” which ‘predicted’ the global pandemic. This book of predictions, written back in 1995 is layered with meaning.

Background of the Story

Sahera did not author the book. However, she knew her husband’s intentions well. Nigel wanted to spread awareness about environmental issues and climate change. He wrote “Twenty Twenty” back in 1995, a book well ahead of its time. It predicted Covid-19, virtual communication, and even the latest technology. However, he was a novelist, not a scientist. Sahera has been asked many times how Nigel was able to predict the future so accurately. She can only imagine it did so, the way it does for her. As she writes, ideas just naturally come to her. This flow of ideas is most likely how her husband came up with his story as well. Nonetheless, it still perplexes Sahera that he knew exactly which year these events would take place. She thought 2012 would have been the obvious year for the story’s setting with doomsday warnings.

Sahera’s Mission to Republish the Book of Predictions

Just before Christmas of 2019, Sahera was walking in a park with a friend. They discussed the upcoming New Year and how 2020 was the beginning of a new decade. She told her friend she wanted to reread Nigel’s book “Twenty Twenty” to mark welcoming 2020. Once Covid-19 hit in January, Nigel’s nephew reminded her to read the book. When Sahera opened it, she was struck by the storyline and the elements of the pandemic and lockdown. She knew she had to republish the spectacular book before the year’s end.

Unfortunately, the interested publishers could not publish it before 2021. So, she and the son of a friend self-published the book on Amazon. The process was difficult because they had to create a digital version first. Sahera had to proofread the entire document by hand several times because it had many mistakes. She even rewrote the foreword and some of the scrambled sections herself, forcing her to think like Nigel.

What the Book Meant to Sahera

It has been 20 years since Nigel’s death, but Sahera remembers the pain she felt rereading his book. It reflected their lives in many ways. The main character is also the author who dies from the virus, leaving his wife behind. He was 63, the same age Nigel would have been in 2020. The character’s wife was also an Asian broadcaster with a diamond nose ring, just like Sahera. They had two sons in the story, but not in real life. She felt like the book was about what their lives would have been like if he had not taken his life. He suggested that his wife would not mind him leaving her, but she claims the exact opposite. Nigel’s passing was devastating for her, and she continues to grieve to this day.

In many ways, Sahera feels the weight of Nigel’s predictions for the future. He makes mentions of the Kogi, an Amazon Native tribe which exists in real life and warns that environmental harm will also cause harm to us humans. Nigel himself stated in his PhD that human disregard for the planet will lead to catastrophe. In addition, Sahera believes that we are ignoring the main issue of how environmental issues correlate with things like Covid-19. She and Nigel want 2020 to be a wake-up call for all of humanity.

The Response to the Book of Predictions

Many of Sahera’s friends expressed their fascination with the republished book. It left some scratching their heads and others intrigued because of its accuracy. Nigel expresses his frustration with the human race and how people are being irresponsible with the planet. He emphasizes the importance of addressing the root cause of humanity’s problems so that we can truly move past them. He also incorporates difficult questions surrounding our existence, identities, and reality into the plot. It is truly a multifaceted story that invokes deep thought and contemplation on various topics.

In all, Sahera and Nigel remind us to be kind to our planet and acknowledge that our actions towards it will affect us in the long run. They also shed light on heavy topics like suicide and how different people express their emotions through writing. You can buy “Twenty Twenty” by Nigel Watts here, visit Sahera’s website, and connect with her on Facebook to learn more.